Woo, I am on a roll with these assignments! This time I chose the troll quote assignment, in which you choose an image of a well-known person, choose another well-known quote, and attribute the quote to someone else entirely. You can see the assignment here.

I started out by looking for quotes. I love the Harry Potter books, and they have tons of really great quotes. I saw this one by Albus Dumbledore that has always been one of my favorites:

“As much money and life as you could want!  The two things most human beings would choose above all – the trouble is, humans do have a knack of choosing precisely those things that are worst for them. ”

The last part of that quote immediately made me think of Spock from the original Star Trek series, it sounds exactly like something he’d say! So I dug around for a picture of Spock…

The quality wasn’t great so I uploaded it into GIMP and edited it by changing the hue and saturation, trying to make it less grainy.

Then I stuck the quote on, and was momentarily stymied as I tried to figure out who I could attribute it to. What non-human pointy-eared character has a tendency to say rather patronizing things about humans?… Ah, Legolas from Lord of the Rings! There’s enough people who haven’t seen either Star Trek or Lord of the Rings (truly, a tragedy) that someone totally oblivious may believe that the guy in the blue uniform against a background of computers is the elf Legolas…maybe?

So here it is in all its glory: 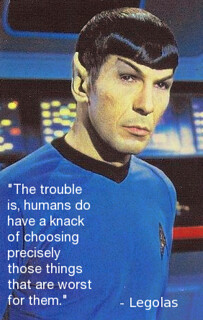